Camera angles, lighting, pacing, and storytelling – these topics run through the minds of students on SFC’s Broadcast Team and SFCtv every day!

What goes on behind the scenes of these broadcasting programs, and what are the lifelong benefits of taking these courses at SFC? John Salyer, an Upper School SFC teacher and coach of 35 years, gives us all the details. He shares how the program has evolved since its inception, what students gain from their involvement in broadcasting, and why it’s such a popular choice for new students.

What Are Broadcast and SFCtv?

Broadcast and SFCtv are Middle and Upper School media programs, offered at Santa Fe Christian School. They provide students with an in-depth experience in the world of broadcast journalism.

John Salyer explains, “There’s Intro to Broadcast, where you get to go through the process of editing, writing, directing, producing, engineering, sound, anchoring, and speech”. Broadcast is part of SFC’s abundant curriculum, and it helps fulfill the art requirement for graduation.

Students who love the introduction class can join Advanced Broadcast which allows them to teach the introductory class alongside the teachers, create their own documentaries, and put on broadcasts to the school.

SFCtv, on the other hand, is an extracurricular club for kids who want to continue to grow their broadcasting experience and skills. According to Salyer, SFCtv covers more than just sports – the club has spotlighted plays and live events, and Salyer would like to expand by adding news into the mix.

Thanks to the help of Chief Technology Officer Rob Honma, the club has access to cutting-edge equipment that is ahead of many university arsenals.

Both Broadcast and SFCtv are about telling stories. “We love Jesus Christ, and we want our kids to be prepared, to be competitive and influential in the world, especially the secular world,” Salyer says. Students involved in these programs are learning to do just that.

The History of Broadcast and SFCtv at SFC

More students are interested in joining Broadcasting and SFCtv than ever before – but it wasn’t always that way.

Salyer remembers when the program first started as a 10-minute broadcast on Friday mornings. “I would pull all-nighters on Thursday nights. The kids were great, but in order for them to get where they wanted to be, it took time,” he says.

“For every minute of finished video, it takes three hours of labor. We were putting on 10 minutes – that’s 30 hours. We only had them four hours a week in class.”

Then, in 2001, SFC’s then principal Clark Gilbert suggested that Salyer haul the equipment from Broadcasting out to broadcast a game. Sports weren’t a part of the Broadcasting curriculum, but Salyer remembers thinking it would be a great real-life experience for his students. So, he recruited a few kids to help out.

What began as teachers and a small group of kids dragging bulky equipment out onto a field has become a full-fledged production. Now SFCtv is 90% student-led, with a core group of 17 students and about 30 more that float in and out.

Like many programs and opportunities at SFC, Broadcast teaches lessons and skills that benefit students for the rest of their lives. Students walk away from Broadcast or SFCtv with better storytelling abilities, a sense of entrepreneurship, problem-solving skills, and the capacity to articulate their viewpoints.

Working in groups of eight or nine, Broadcast students have to find ways to tell compelling stories about a variety of subjects. “Even if it’s a football game or a basketball game,” Salyer says, “you’re telling a story. You’ve got to get an idea together and then tell it through film.” No matter the subject, students in Broadcasting and SFCtv work together to produce media that is thoughtful and engaging.

SFC students run the show, so they learn to take ownership of the entire creative process. Filling five minutes of airtime and making a story interesting is a difficult task. The level of agency the students use while creating their projects encourages them to adopt an entrepreneurial mindset.

During the production process, problems and mishaps are bound to happen. Salyer is always there to advise, but he says it’s the students who “make decisions based on logistics – where they’re placing cameras, who’s going to do what. They handle all that themselves.” The result is that the kids learn to solve problems calmly and to work together toward success.

One of the biggest benefits of participating in Broadcast or SFCtv is that students become much better communicators. They learn how to listen actively and understand another person’s point of view.

In Salyer’s Media Arts class, students pick a controversial issue and find guests to interview about it. He encourages them to research ahead of time and “dig deep on both sides of the topic.” Salyer says this is his favorite project of the year because it requires students to have “an understanding of their political, social, and most importantly, spiritual views of topics.”

There’s no question that students involved in Broadcasting and SFCtv gain experiences, skills and perspectives that are crucial for navigating the real world. As Salyer puts it, “All of our kids come out of this program with the capabilities to write, to articulate, to speak, to be a part of something bigger than them, and to be successful.”

Why Students Should Join SFCtv or the Broadcast Team

At SFC, there’s no shortage of options when it comes to electives and extracurricular activities. So, why should students choose to be a part of SFCtv or the Broadcast Team over many other options?

The program truly has a place for everyone. “You can be in front of the camera, or behind the camera, or above the camera,” Salyer says. “Either way, you can find something that you’re great at, and then you can give that gift to the community.”

One former Broadcast student recently went on to start his own successful production company in Australia! So, whether the program inspires students to pursue a career in broadcasting or simply supplies them with exciting opportunities to grow, they’ll be better for it. 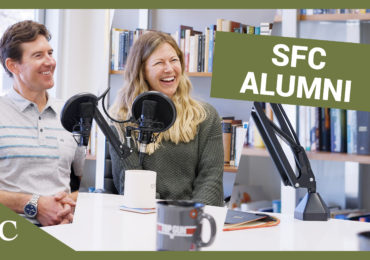 Tune in as Andrew and Brad chat about SFC memories, the foundations of life-long friendship, their career journeys, and just life in the “adulting” world. It’s a MUST listen.